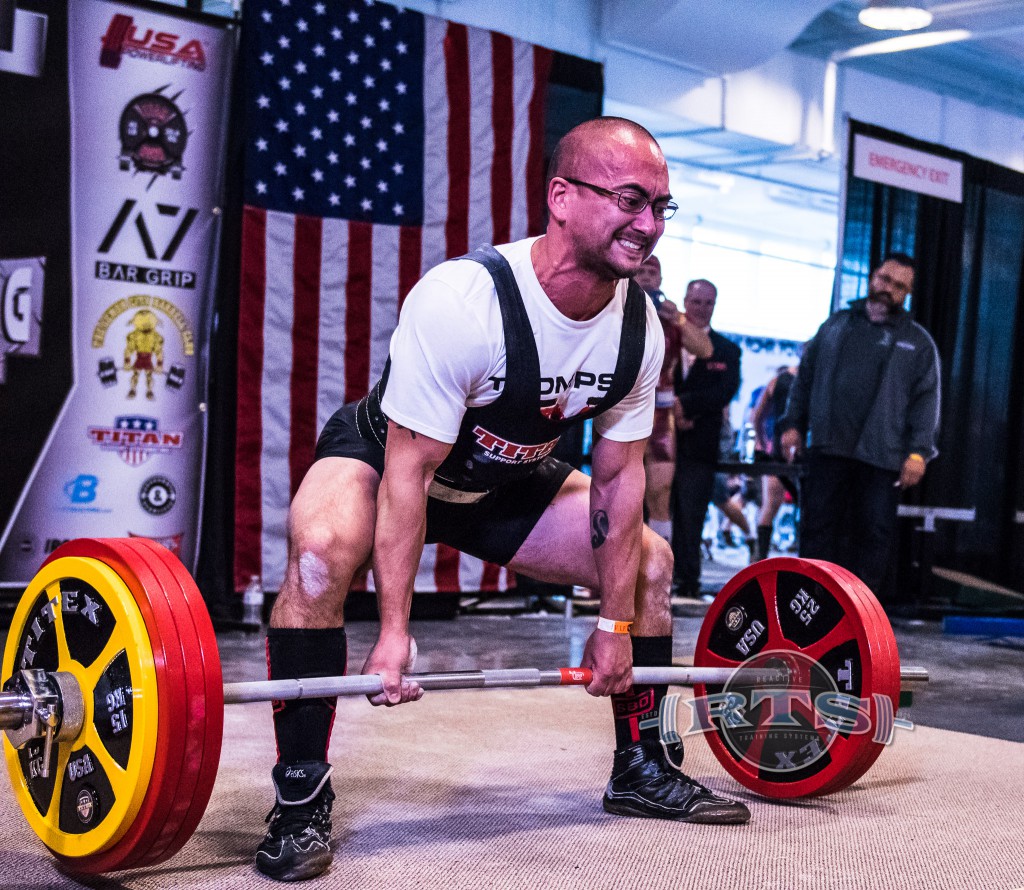 Not only do we have to consider intensity in developing a program, but we have to consider volume as well. While the two are interrelated in getting from Point A to Point B, a good way to look at it is that intensity determines the training effect, and volume determines the magnitude of that training effect. So, as a coach, I prescribe less reps per set with more intensity to develop strength in an athlete, and more reps per set with less intensity to develop (say) hypertrophy.
This important to note: for intermediate and advanced athletes, the rep range is always prescribed by programming, when the coach develops the training cycle. Different rep ranges target different systems; doing an all out set of 3 reps is not the same as doing an all out set of 10 reps.
This approach differs greatly from a well-known 5×5 program, used by many beginners. In this program, which will remain unnamed, the lifter is supposed to do five sets of five reps with a target weight that increases each week. Typically, there will come a time when the lifter can do the first set or two quite easily, but has trouble after that. S/he might hit the third set, and gets four reps, the fourth set two or three reps, the fifth set two or three reps. END_OF_DOCUMENT_TOKEN_TO_BE_REPLACED 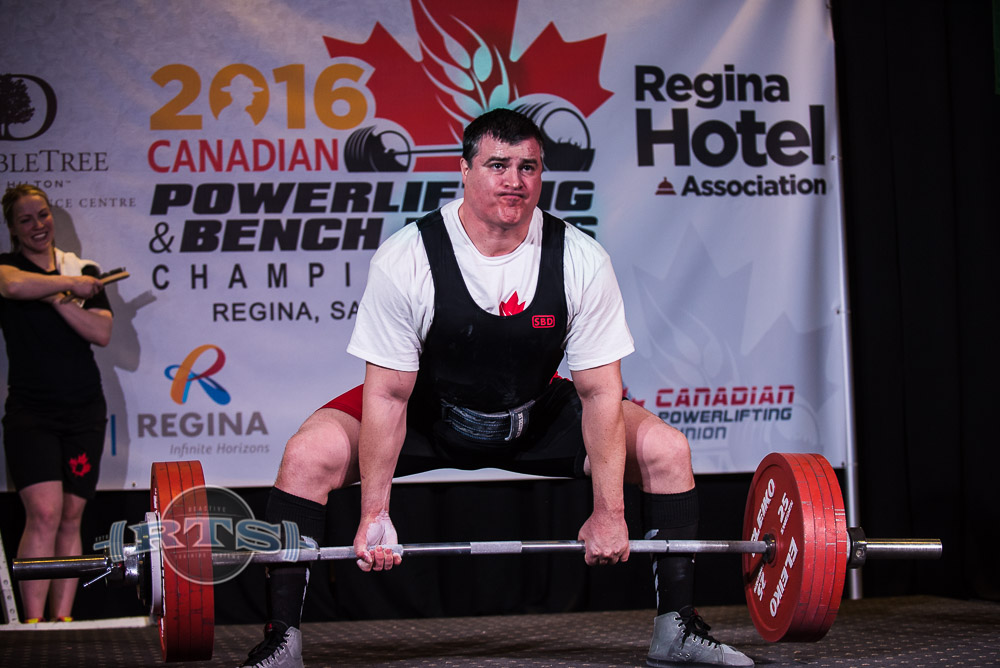 Quick review: autoregulation is a strategy to control the intensity and volume of training so as to maximize training effect while accounting for changes in the individual. Changes which impact training can include stress, illness, and injury. Of note is that “stress is stress.” Whether stress originates from training volume, from relationship problems, from money problems – there’s only one mechanism in the body for coping. So if that mechanism is busy coping with external stressors, the last thing we want to do increase stress from training.

A tactic that can be employed is RPE. RPE quite intuitively provides a means to regulate intensity on-the-fly: the basic concept employed is that of “difficulty in moving the weight.” As the athlete adds weight to the bar for the back squat, the move becomes progressively more difficult, and the athlete works with more intensity, up to maximum possible intensity: the one-rep max (1RM). Intensity determines training effect.
So why not just use the 1RM, and Prilepin’s table, and develop training blocks based on that?
END_OF_DOCUMENT_TOKEN_TO_BE_REPLACED

A Case Against Specificity 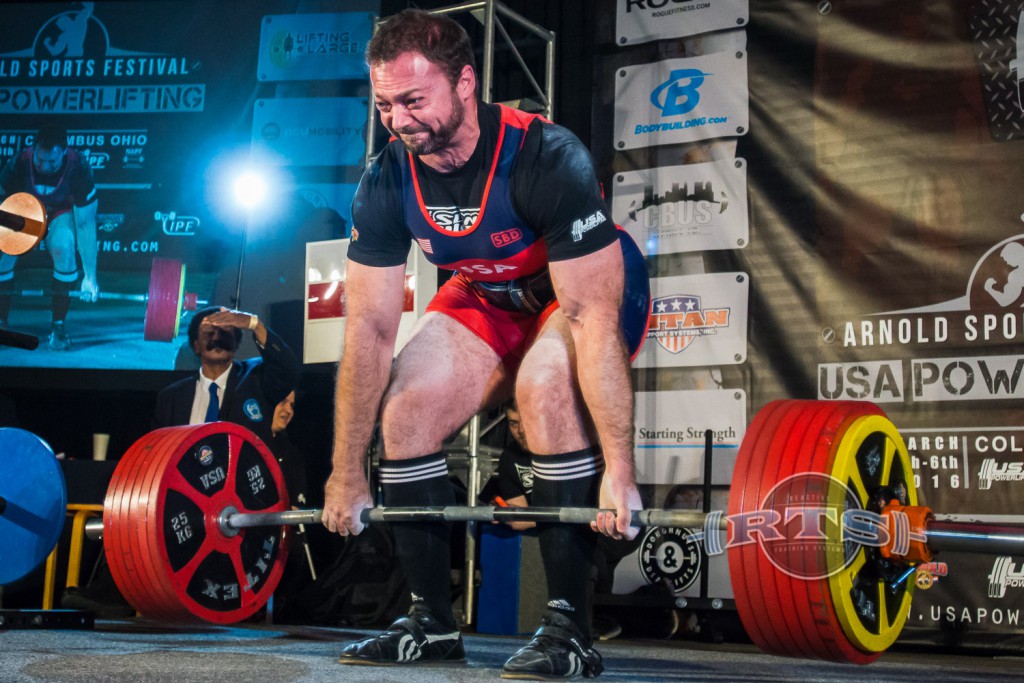 Pendulums swing to and fro. That’s what pendulums do. I see another pendulum swinging lately and this one has to do with exercise specificity. Not long ago, the pendulum was as far away from specificity as it gets. Lots of lifters and popular writers talked about what assistance exercises drove their lifts the most. In powerlifting, you had guys who never actually trained the contest lifts, yet did all manner of other lifts with varying degrees of non-specificity. I’ll admit that at one time I bought into this, but I’m happy to say I was impressionable at the time and have since grown out of it.

Contrast that with what we see growing in popularity over the last couple of years. There has been a resurgent popularity in the SAID principle (specific adaptation to imposed demands). By in large I would say this is a very good thing, but like all things it can be taken too far. Some lifters are even ahead of this current trend and train only in hyper-specific ways (for example, ONLY perform their contest lifts and perform them using extreme loads at all times). The pendulum is swinging in this direction more, so I expect this to grow even more in popularity before it stops.

END_OF_DOCUMENT_TOKEN_TO_BE_REPLACED

A friend of mine used to tell me “health is cumulative.” What he meant was that you could think of your health like a bank account of sorts. Doing certain things added to your overall state of health. Other things subtracted from it. And if you work yourself into a hole, you’ve got to work yourself out of it again.

The same concept applies in the strength world. There are some things that you need to do to stay injury-free. You can neglect them for a while, but the longer you do, the more risk you take. Often, this comes in the form of neglected muscle groups, but can also include other aspects of overall fitness (flexibility / mobility, energy systems, etc).

Recently I was having a conversation about this with another coach. We were both remarking that high-specificity training (even extremely high specificity) undeniably gets good results in the short-to-mid term. But left unchecked for longer periods of time, lifters get injured. We know that a major key to long term progress is avoiding injury. So this very-high-specificity training cannot be a long term solution to your progress.

END_OF_DOCUMENT_TOKEN_TO_BE_REPLACED

Writing can be a difficult process, even for those without literacy issues! I know at least for me, I have all these ideas in my head and they all interrelate to one another. Writing is a process where I attempt to take those ideas, untangle them, and put them in a logical, readable form that makes an impact on the way people train or live. Because of the interrelatedness of different concepts – the sheer organic nature of athletic training – I often feel like I fall short in terms of getting my points across. That’s not a que for you to pity me – that gets us nowhere. It just means I continually try to improve what I write about.

Take for example the RPE Chart. In my book, The Reactive Training Manual, I discuss what the RPE chart is and how you use it. I also say that it is best if you customize the given RPE chart to fit yourself as an athlete. But that’s all I say. I don’t tell you how to go about that or anything. And as a result, I get the impression that very few people do any customizing to their RPE chart at all.

So what is a process-oriented guy like me to do about it? How about design a process that helps people fix this problem?

END_OF_DOCUMENT_TOKEN_TO_BE_REPLACED

Probably the most frustrating part of powerlifting is KNOWING in the marrow of your bones that you can do a task, then being unable to do it for some pain-in-the-ass detail. This could be an injury, a technical “tick”, or one of the most frustrating for me personally, a failing grip.

Dropping an otherwise easy deadlift due to grip issues is a special kind of suck. It’s an awful feeling that leaves many lifters looking at their hands in disbelief. It’s also incredibly stubborn. Many, many lifters have tried all kinds of crazy stuff to improve the grip. Almost all of it fails.

Stuff that just doesn’t get the job done
Reporting negative results is just as important as reporting successful trials. And boy, have we tried some things and failed some things!

There are a ton of gadgets out there that all promise to improve grip. And perhaps it’s a little misleading because there are so many different kinds of gripping strength and the hands are such complex organs. But one way or another, we tried a lot of them that did nothing. Crushers, fat bar work, active grippers (like Grip 4orce), rolling, etc… none of that helped me or my lifters.

END_OF_DOCUMENT_TOKEN_TO_BE_REPLACED

For as long as I’ve been lifting weights (and probably a lot longer than that), “Long Term Planning” has been eschewed and neglected by powerlifters – especially the typical non-professional-coach type, but even by some prominent professional coaches. The thing is successful coaches see the benefits (and also the limitations) of long term planning, so they put it in its proper place – much to the benefit of their athletes.

I make it no secret that I greatly respect Norwegian Powerlifting coach Dietmar Wolf. In 2013, his most prominent lifter, Carl Yngvar Christiansen (CYC for short), placed 2nd at the IPF World Championships – only 12kg behind the winner. Now, by all accounts this is a fantastic performance, but some of CYC’s lifts looked quite easy. After the meet, there was quite a bit of discussion about, “why didn’t he go for it?” Someone had heard that CYC had a minor injury and the Norwegian coaches wanted to play it safe. Still some of my friends questioned the call saying, “When you’re there, you’ve gotta take the shot!”

The thing is I see where they are coming from, but I also know Dietmar Wolf a little bit having spoken with him on several occasions. I know that he likes to consider the long term view of things. His goal is to take the athlete to their genetic potential, which is a 10+ year vision, not a 10 minute vision. Lo and behold, after playing it safe at the 2013 championship (and avoiding injury), CYC came back in 2014 to crush the competition by 200kg, set a World Record Squat and Total, and also hit the highest Wilks of any lifter in the IPF. Score one for long term vision. END_OF_DOCUMENT_TOKEN_TO_BE_REPLACED

This past June, I went to Russia for the IPF raw world championships. I met one of the Austrian lifters in the 120kg class — Alex. He was a real nice guy and we had a good chat about training and such. Fast forward until a few weeks ago. Alex emailed me to let me know he would be on a road trip and they would be passing through my neighborhood. So they stopped by yesterday and we trained. It was really cool to have a training partner, even if we did tend to chat too much between sets.

One of the things we talked about was the feeling you get after going to a big competition. For both of us, it’s this imperative feeling that you MUST train more. You MUST find a way to get better. In lots of ways, it makes the obsession deeper. It’s a reality check of sorts. “Hey, there are plenty of other strong folks out there. I better get back to work!” Speaking for myself, it makes me want to train more, train harder, and basically pour more effort into perfecting this craft. END_OF_DOCUMENT_TOKEN_TO_BE_REPLACED

Not Your Typical I.T Guy

While being relatively new to the sport of powerlifting, Mike Garozzo is not your typical newcomer. He has racked up an impressive total in a very short amount of time. This interview was done back in April 2015 and a lot has happened since then. Mike competed at the RPS Heatwave meet held in Long Island, NY on July 12th totaling 1675lbs raw without knee wraps at 198lbs bodyweight and later competed at the 2015 USAPL Raw Nationals in Scranton, PA placing 7th in the open division with a 1642lbs total. Here is a look at Mike’s progress over his brief career:

RTS: How did you get into powerlifting and eventually start working with Mike?
Mike Garozzo: I got into lifting through a weight loss contest at work. I used p90x and a strict diet to win it… by a lot. I’m right around 5’10” and my body gains and loses weight very easily. I went from a chubby 195 lbs to an extremely lean 152 lbs. Once that was over, I realized that I needed to build some muscle because I was tiny, but I had no real weight training experience to this point. I started researching and realized strength training was the way to go, at the time StrongLifts 5×5 caught my attention and I started with that. I started SL 5×5 in February 2012 and I started with Mike in December 2013. RTS and Mike were brought to my attention when someone posted on one of my training videos on YouTube about him. After reading everything on the RTS website I knew I wanted to work with Mike and give RTS a shot, I’ve never looked back since. END_OF_DOCUMENT_TOKEN_TO_BE_REPLACED