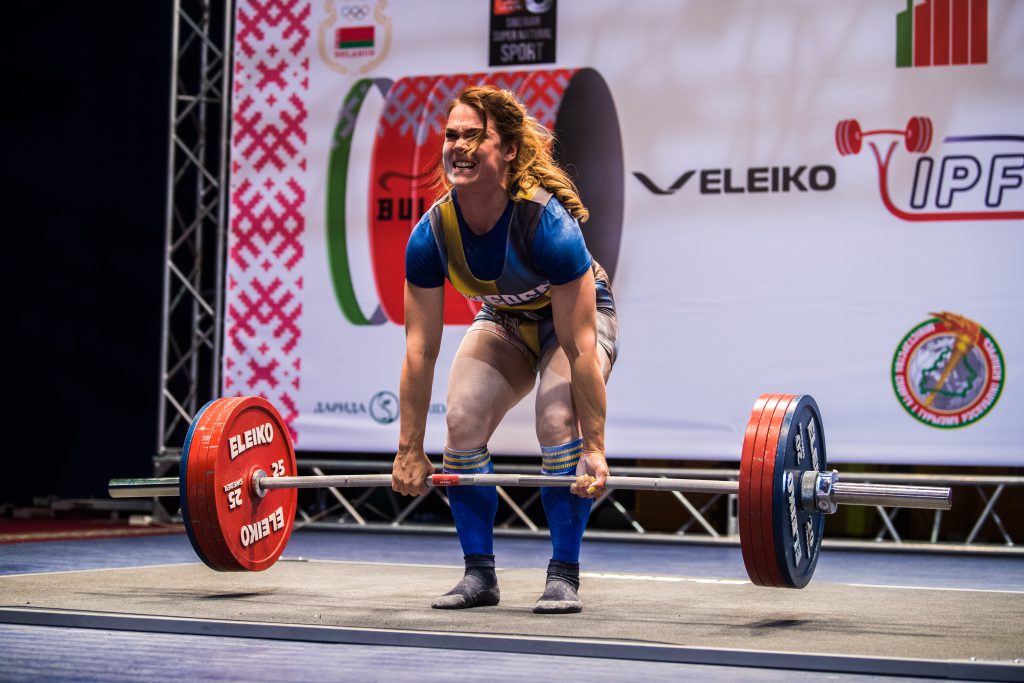 We all want athletes to have the proverbial “perfect technique”.  Some astute coaches even say “THEIR perfect technique” – to emphasize that “perfect” is relative to the individual athlete.  But how do we get there?

Traditionally, we think of coaching technique this way; coaches will have a model of what perfect technique looks like in their mind.  Then, an athlete’s performance is compared to this ideal and deviations are pointed out for correction.  This is how we know that knee valgus is bad, tucking the elbows some (but not too much) is good, and hitching up your deadlifts is a failure.

One set of problems comes from the model itself.  Is the model detailed or general?  If you have a finely detailed model, then the coach can make detailed corrections for the athlete, but these corrections aren’t individualized.  And we know how important that can be.  Anyone beyond the most novice of coaches will have seen different athletes are built differently in ways that are meaningful.  And not all of these ways are visible from the outside.  Things like bony structures cannot be seen but make a big difference to how athletes move.  And there are many other considerations beyond that with just as significant of consequences.

An alternative would be to only have a general model in mind.  A general model would only cover technical points that are non-negotiable.  This allows for more variation due to individual differences, but lacks the ability to provide detailed feedback to the athlete.  That is to say, it can tell us if things are really wrong, but not much more than that.

Other options, such as having multiple models for different types of lifter, etc fail to address at least some of the concerns laid out in each approach above.  And I know that this sounds very philosophical right now, but it’s practical too as you’ll see in a bit.

There is another set of problems with this general strategy besides the model itself – it’s how the corrections are made.  Often, cues are offered to the athlete.  “Knees out”, “Chest up”, “HIPS!” can all be heard being shouted by Powerlifting coaches the world over.  But offering these cues to the athlete on a continual basis is suboptimal.

In a competitive setting, the athlete may not be able to hear or may be too distracted to listen to the coach’s shouting.  That doesn’t mean the coach shouldn’t shout, but reasons why are another topic for another time.  And in an online setting, coaches are unable to provide that in-the-moment cuing that this method needs to function at all.

It’s far better if an athlete can feel what proper movement feels like.  They will have that at all times and the perceptual feedback it creates gives an athlete ideal points to focus on during a competition when nerves can be playing up.  The goal for coaching technique must be that the athlete learns to move correctly, so if you find yourself always shouting the same cue, perhaps the cuing method isn’t working so well.

A Different Way of Thinking About Technique

During my podcast with Dr. Megan Bryanton, we discussed this very topic (general vs detailed models).  Her answer was one that I thought was a very smart way of addressing the problem.  She said that she starts with the general model, then individualizes it by watching how technique changes (i.e. breaks down) as the lifter progresses from lighter weights to heavier weights.  It’s a very ingenious way to address the problem with the models in a practical way.

I’d like to attempt to build onto that concept here.  To do that, I’m going to borrow some language from Frans Bosch.  Bosch’s work is very interesting to me, but I can’t be certain I’ve got it completely correct.  I may be misusing some terms here slightly, but in any case, I’ll do the best I can to define what it is that I’m talking about.

Bosch categorizes technique in terms of Attractors and Fluctuators.  Attractors are those non-negotiable parts of your technique.  Things like squat depth, keeping your butt on the bench, etc are obvious attractors since violating them will nullify the lift in competition.  Attractors can also be placed around common injury points – so one would probably decide that rounding your back in the squat is not okay for anyone.  The same can be said for tucking the elbows in the bench.

Attractors define the minimum requirements for a lift.  What makes it a squat and not a lunge?  Is it still a squat if my stance is wider or narrower?  If yes, then that’s NOT an attractor!  We don’t want to place more attractors than is necessary because we want to allow a lifter’s individual differences to fill in the rest of the spaces.  Those technical points are called Fluctuators.

As the name implies, Fluctuators are those technical points that change.  They can certainly be different from one lifter to the next, but they can even change for one lifter over time.  For an example, think about the lifter who gains bodyweight only to find that his squat stance needs to be wider to accommodate his new size.  There are many reasons technique can change and not all of those reasons are immediately obvious.  Back to my conversation with Dr. Bryanton, the general model defines the Attractors.  Then she fills in the fluctuators for each athlete by watching how they move with a variety of loads.

Athletes themselves, as they improve, will notice technical points that are important, but are also not really visible to outside observers.  And these may change over time as well.  Athletes need to have the freedom to explore these technical variations.  More than that – the training environment should be organized in such a way as to promote this type of experimentation and learning.

I make it a point not to over-cue my athletes.  In fact, I usually only offer explicit technical input if they are violating one of the attractors.  Why?  Because I want them to self-organize their movements.  But that doesn’t mean I’m not paying attention to technique.

If I control my lifter’s technique in a top down way – where they aren’t allowed to experiment with different bar positions, toe angles, grips, etc – then all the experimentation must be controlled as well.  And I don’t think any system can control those variables as well as an athlete’s own brain.  The athlete’s movement intelligence can be a guiding light here – giving them an intuition about what will “feel better” or produce more strength.  In addition, the benefits this gives lifters in terms of buy in from increased autonomy can’t be overstated.

So if an athlete’s movement intelligence is the ideal way to produce these small variations, I want to place the athlete in situations where those experiments are impactful and where the results are quick and clear.

If an athlete has trouble with hip rise / “good morning” squats (what I call the chest-fall pattern), I would prefer to address that in multiple ways.  One way may be to address muscles that are under-producing torque to cause that technical breakdown, but that’s really a separate topic.  From a technical standpoint, I want to come up with particular squatting drills that teach them not to commit this error.  These drills would reward proper movement via the lift being easier, allowing the athlete to use more weight (the thing all Powerlifters want).  It would also punish incorrect movement by being harder or impossible, requiring the lifter to use less weight.  In the chest-fall example, a Front Squat could be a useful teaching tool because any chest-fall pattern will result in the lifter dumping the bar (immediate feedback).  There are many others too – Pin Squats, Safety Bar Squats, and High Bar Squat being some of my favorites.  The consequences there are less obvious, but still sufficient.  Moving correctly will allow the athlete to add a bit more weight.  Moving incorrectly will make the lift harder than it has to be.  But the idea is always that the lifter gets immediate and clear feedback from the movement itself that they did it correctly or not.

This immediate feedback allows the lifter to learn for themselves how to brace, if subtle stance changes make a positive impact, etc.  It also allows them to “feel it”, which is the type of tacit knowledge that an athlete needs.  It’s much more important than the lifter being able to explain it, but unable to perform it properly.  This type of drill that provides immediate feedback is especially critical for an online coach because in-the-moment corrections cannot be made.

The third prong of this approach is to integrate the learned patterns back into the competition movement itself.  This can also be done with a minimal amount of verbal coaching provided there is space in the program where the athlete can experiment in small ways.  Of course, the athlete must understand the problem and strategy being employed as a correction in order that their efforts are directed properly.  But I find that this is typically pretty natural for lifters to do.  Once they learn what it feels like to brace hard enough, transferring that back to the competition lift may take a small amount of practice, but usually comes quickly and without specialized efforts.

If you think this is lazy or easy, then you are not understanding it correctly.  Much care must be taken to select the proper drills that, by their nature, teach the athlete proper movement that can then be re-integrated into the competition lift.  I would say, from an effort standpoint, it’s roughly equivalent to the “cuing” methods.  But the effort is focused on causing the athlete to feel proper movement and integrate that into the competition lifts.  That’s also not to say that there should be no verbal communication with this method.  A good coach will communicate the intent of the drill, but should be cautious that the message that the athlete hears is the same as the one the coach intended.  Don’t let them fall too far into the “technique work must be light and always perfect” trap.  Useful technique work is challenging.

Allowing athletes to experiment and self-select the nuances of their technique improves their movement intelligence and assists them in solving movement problems.  This is normal, but it can be made greater via the program and the training environment.  Self-organizing technique provides them with a level of detail in their technical understanding that cannot be properly communicated in any other way.  Cues can be sometimes useful, but a deep understanding of the movement and strategies to complete it is better.

Footer:
If you enjoyed this article, please share it. Join the conversation on our RTS Facebook page.