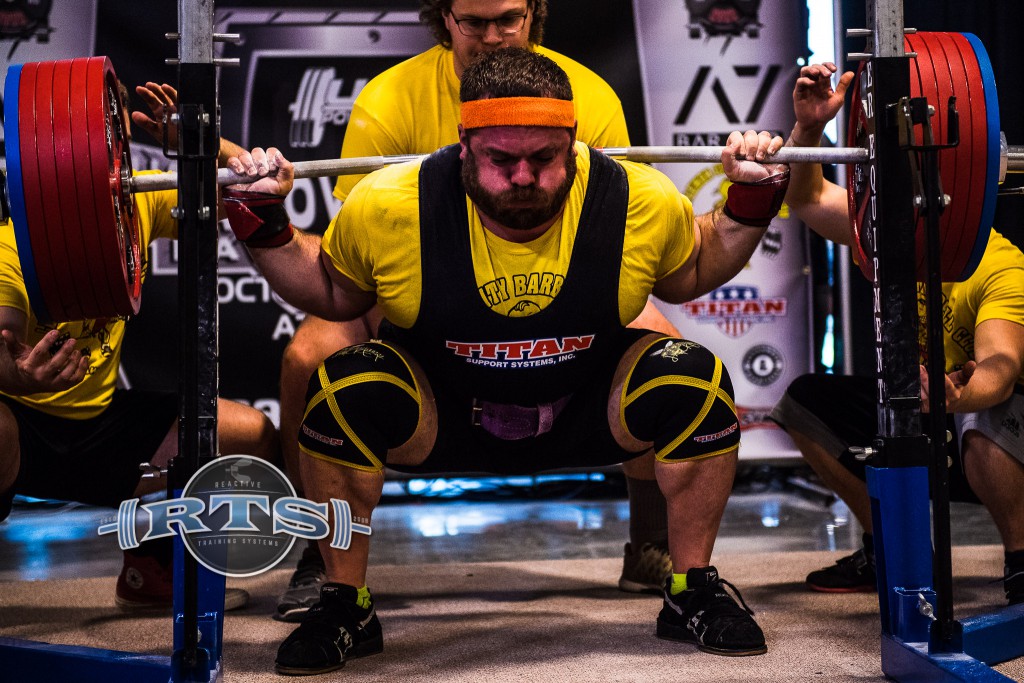 Other Interests: Family, cooking, and training young athletes. “I have been blessed with four successful daughters and an understanding wife.”

Tim Thomas has a nickname at the Belleville Weightlifting Club. We call him “Tim ‘Too Tall’ Thomas”. Being 6’4’’ in the sport of powerlifting raises challenges that would slow down anyone attempting to gain strength. But Tim is the type of guy who doesn’t make excuses for his body type or age when it comes to benching. After 5 years of training with Tim, I have never once heard him complain about his long limbed mechanics. He works hard and smart to work through his disadvantages. His attitude and passion for pushing bigger weights allows him to focus on what matters most in training…simply getting stronger.
Tim has been powerlifting for about 12 years. Since high school, Tim had weight trained to help make him more competitive for sports. He was on the football, track, and wresting teams through high school and was fortunate enough to attain a wrestling scholarship to Southeast Missouri State University where he wrestled for a year. He competed in the 177lb class. Even after college, Tim couldn’t get enough of sports. He always played something. He enjoyed softball, basketball, racquetball, and soccer (the beautiful game). However he always felt that training with weights allowed him to compete at higher levels and utilized weight training as an instrument to increase his performance. He even used weight training to develop his abilities in triathlons and competed in them for 5 years. I should also note that when he was a triathlete, Tim weighed 210lbs.
Before powerlifting, Tim’s weight training consisted primarily of bodybuilding routines and methods he read about in many of the popular bodybuilding mags. He remembers reading about one routine that claimed to put one inch on your arms in 8 hours. You would do one triceps and biceps movement every 30 minutes and are rice and chicken and drank a protein drink every hour. In the last few hours, you could barely finish the exercises before the next 30 minutes came around. He said that it did put an inch on his arms, but it wasn’t muscle, it was from swelling. I can’t help but think about how much that routine hurt and when I heard about this the first time, I immediately started laughing. But don’t pass judgment, we’ve all tried something similar.
Before training with RTS, Tim utilized different methods of powerlifting to bring his lifts up. He used the Westside methods for around 6 years with training partner Dana Rosenzweig (prior and current World Master Bench Press Team Member). They both followed Westside systems religiously since the early 2000’s. Looking back in training, Tim feels that Westside moved him forward in strength, but with setbacks and injuries. Tim looks at Louie Simmons as a pioneer and feels that the powerlifting community owes Louie a lot for challenging weight training scientifically and encouraging people to think about training intelligently. After Westside, most of the bench pressers at the BWC attended a Metal Militia Seminar with Sebastian Burns at the Lock-Up Gym in Taylorville, IL. I think that it is safe to say that we all learned more about equipped bench pressing in that seminar than we had in years of training. The gains came quickly, however after a few cycles of training this way, we stagnated. All of us received some sort of injury from training this way, but we still use a ton of Metal Militia principles in our training. (Personally, for me, I think that what I’ve learned training in the Metal Militia style had implanted certain habits that helped many of us take our bench presses to the next level while training with the Reactive Training System. For that we thank Sebastian Burns and the rest of the Metal Militia Team)
Tim started using the Reactive Training System immediately after the 2008 USAPL Bench Press Nationals. Tim, Shaun Bales, Scott Baquet and I drove to Charlotte together so Tim had quite a bit of time to pick my brain about RTS on the way back. He noticed the dramatic results that I earned using RTS along with Shaun and Scott. Tim bombed at that nationals and figured that he needed to make some changes. After our discussion, Dana and I put together a basic RTS plan for a contest 3 months away. This first contest on RTS didn’t quite go as well as thought out. In training, many of his lifts were in the 9-10 RPE range and we believe that he went in a little banged up. He remembers thinking that me and my training partners assigning RPE’s was the stupidest thing he had ever seen, but after seeing what they do on paper, they are critical in determining projected maxes, trends in strength increases, and analyzation of our current state of training.
He didn’t give up on RTS, so he and Dana began researching the system. Between that and Dana and I attending Mike Tuchscherer and Eric Talmant’s seminar in St. Louis, we were able to discuss and test out training ideas with Tim and the rest of the guys. In another few months, Tim was able to match his personal best bench press of 435 in competition. Last year, Tim competed in 3 meets in 2009. The first two matched his personal best, then in the last contest, Tim pressed a 15lb PR (450lbs) and looked to be good for even more than that! (at least 460lbs) In each of these meets he went in feeling rested and mentally and physically prepared to lift. In over 10 years of competing, he always went into a contest feeling beat up and couldn’t wait for the event to be over so he could rest up. Now, with RTS he knows how to prepare for contests. This is a huge psychological advantage. 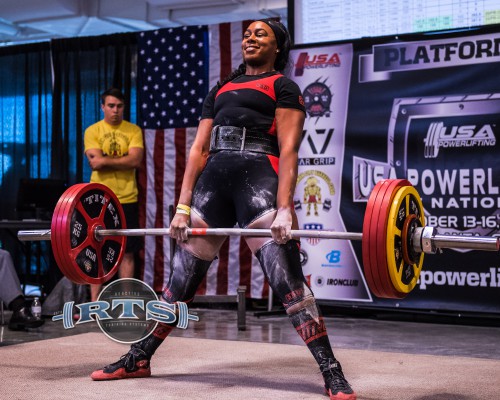 By training with RTS, Tim understands the importance of building his weaknesses and exploiting his strengths. He is tall, at 6’4’’ and 275, but he is extremely proportionate and surprisingly lean for a bench presser his age and bodyweight. In the past, he would train at a weight of 285, but now after cleaning up his diet, he trains closer to 275 and hasn’t lost any strength in the process. He doesn’t necessarily focus on the disadvantages of his lifts, but instead he focuses on the movement and how efficient he is with moving weights. Wherever he sees a deficiency (not a disadvantage) in his exercise movements, he builds up lagging areas and works hard to make them better. Favorite exercises intended to work on his lockout (one of his weaknesses) are equipped reverse band presses and close grip board presses. The equipped reverse band presses teaches the lifter to touch lighter weights with a tight shirt and overload the lockout.
Having competed in three meets using RTS, Tim feels that he has a good understanding of programming his training in a peaking cycle for a meet. Exercise selection is important, but not as important as the right template and periodized plan. His next contest will be in March and I have some ideas for Tim. The last 8 weeks of training for this contest is as follows:
Week) Phase – Stress/Intensity
8) Accumulation – Medium / Low
7) Accumulation – Low/Medium
6) Accumulation – High/Medium
5) Accumulation – Medium/Low
4) Transmutation –Medium/Medium
3) Transmutation –Medium/High
2) Realization – Test 95%, Medium/High
1) Realization – Medium/Low-Medium
C) DELOAD and Competition

He will train with a 3 day per week frequency. It looks something like this:
Day 1) Main Lockout / Secondary Raw Press
Day 2) Triceps / Shoulders
Day 3) Main Raw Press / Secondary Lockout

Tim also will do some auxiliary and lat work after most of these main slots.

Tim is grateful to have Dana as a training partner. They are close to the same age and close to the same in strength (which means he still is behind Dana on Wilks coefficient since Dana competes at 198). However, both are still showing improvements even in their 50’s, and who knows how much they’ll lift this year. Tim isn’t showing signs of slowing down. What I like most about Tim, is that he is purely an all around incredible guy. He is a great training partner, involved father, hard worker, and gives 100% into everything he does. When I first started out at the BWC, he and Dana took me under their wings. They took care of me and made sure that I wasn’t left out and pushed me to new levels. I am just glad that I was able to bring RTS into the club and reciprocate what has been given to me. As for Tim’s future, we plan on researching and implementing better periodization models to focus on his current level of classification.