To Belt, Or Not To Belt: An Equipment Primer for Raw Lifters

To Belt, Or Not To Belt: An Equipment Primer for Raw Lifters
By Mark Robb

When should you use a belt? This, and many other equipment questions, keep periodically coming up among lifters new to RTS. This article is meant to help those unfamiliar with RTS training techniques and / or with raw lifting with their understanding of some of the equipment used in both training and competition. This first article will deal primarily with the use of a belt, and to a lesser extent shoes.

By definition, raw lifting uses minimal equipment, making it even more important that you understand how to get the most out of what little you are using. At the very least, your equipment should not hinder you! I will be addressing equipment allowed in USAPL/IPF “Classic” competition as that is what I am familiar with. I do not consider the use of knee wraps to be “raw” lifting, but rather, an overload technique. Use of knee wraps as such will be addressed later on in this article series.

The most important pieces of equipment used in raw competition are a lifting belt and your shoes. All else is pretty much inconsequential to the generation of strength. 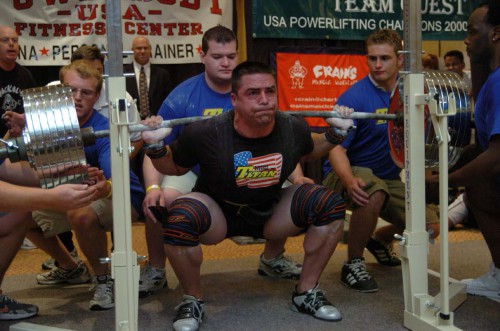 Training equipment that I will discuss in a future article includes equipment used for overloading, such as bands, chains, knee wraps, and RAM or Slingshot for bench. There are also a variety of methods used for training different parts of a main lifts’ range of motion, such as boardpresses of varying thickness, towel press, standing on blocks, etc. These are pretty much self-explanatory and for purposes of this article will be ignored since any discussion would be more about the training effect rather than the specific use of this equipment.

So, when should you use a belt in training? The default training position should be to NOT use a belt for the building of strength in general. A lifting belt is an aid. In order to get the most out of this aid, you must build the core strength first, then use the aid to get just a little more support in the midsection. Using the aid too soon will just inhibit the building of that all important core strength.

When I see novice lifters fail at a squat attempt, it is almost always due to a lack of rigidity in their core or upper body and seldom a lack of hip or leg strength. The same holds true for deadlift. Rarely do you see a high level powerlifter with that “wasp waist” that is so sought after by bodybuilders. A thickly muscled, powerful midsection serves a strength athlete far better for transferring force.

If we set the belt aside for the building of strength in general, then when is it appropriate to use it? I would say that there are two circumstances where it is appropriate; 1) for protection against injury, and 2) to train the competition lifts. 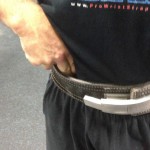 Keeping in mind that every time you put a belt on, you are using an aid and therefore forfeiting the potential benefits of not wearing one, it may still be prudent to use it when doing overload training if you are worried about injury with using more weight than you can actually handle without it. Overloads will no doubt be a small part of your training rather than a mainstay, so the benefits of using a belt may outweigh the loss of opportunity to build core strength. Another example of a time when it may be appropriate is when lifting with a low back injury or other injury or weakness that you are trying to support in healing up. If the belt allows you to get some work done while helping to protect an unstable or slightly injured area, do it! Just be sure to take it off again once the area is healthy.

It is also appropriate to wear a belt while training the competition lifts, leading up to a competition. “Practice like you play”, as they say. I have noticed that, as a rule, beginning lifters will wear a belt too tight. I was taught how to fit a belt, about 35 years ago, by my good friend Willie Morris. Willie was a long time IPF competitor and World Record Holder. His measure of how tight a belt should be was if you could put two fingers in sideways between the belt and your abdomen without sucking in your belly, it was about right. The reasoning behind this is that you need to be able to expand your core out into the belt. If it is too tight, it will restrict your ability to get your core tight by “choking” what is already likely your weakest area, as discussed earlier. Expanding your core means expanding not only anterior, but 360 degrees circumferentially.

A few years back, I learned that Matt Gary of Supreme Sports Performance and Training (SSPT) actually trains and competes without a belt so I was interested to hear his opinion. He quit using a belt, along with pretty much all other gear or lifting aids, after a series of fairly serious injuries and three surgeries over a fouryear period from 2007 – 2011. At the time of his initial injury, he was lifting in single-ply equipment. After continually reinjuring himself, he finally decided to start over from the “beginning” so to speak, and build a solid, healthy base without the use of any type of lifting aid. He has done so very successfully and has since competed beltless in two consecutive USAPL Raw Nationals.

Matt hopes to pull about a 600-pound deadlift at this year’s nationals, beltless, and as a Master. He eventually plans to incorporate the belt again, but has some beltless goals he wants to reach first. We talked about the use of a belt in training and competition, and are in complete agreement about it. He thinks that he might get as much as 15 – 20kg out of a belt when he puts one back on, trains with it, and uses it to its’ potential. Personally, I get about 2.6%, or about 7-8kg out of my belt. It will be interesting to see how much he actually gets out of it after training without one for several years. I am betting that he won’t get that much because his torso will be so strong that it won’t make that much difference. 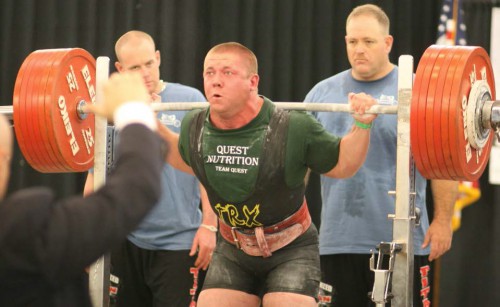 A Word on Shoes
There are so many possible combinations of heel heights and makes available and so many differing opinions as to which is the right choice for a particular lifter that I will not even attempt to delve into that quagmire! There are just way too many variables involved. There is, however, one common thread that holds true no matter what type of shoe you choose for each lift, what heel height, etc. That is, they must provide a solid base! No one can perform at their best while standing on an unstable foundation. Normal “tennis” or running type shoes are like standing on a foam block and are completely unsuitable. Even Converse “Chucks” or similar are not ideal. Although they don’t have much padding in the sole, there is still a bit of cushion, and the sides are too soft and do not prevent the heel and foot from rolling sideways. My partner, Chad Rexrode, trained and competed in “Chucks” for a while. When he got a pair of Do-Wins, he couldn’t believe the difference. I videotaped his feet from the back during a heavy squat session. The difference in stability between the Chucks and lifting shoes was obvious.

Take Home Point Regarding Shoes
Whatever shoes you choose, make sure they have a solid sole with little to no cushion, and some good side support for your heel and the rest of your foot.