You DON’T Have “Plenty of Time”

You DON’T Have “Plenty of Time”
By Mike Tuchscherer

I’ll never forget my first 800-lbs deadlift in competition. I was still relatively unknown in the powerlifting world. I’d won a Jr. World championship, but I’d bombed out of four (4!) other national level meets. It was well before Facebook (at least for me) and unless you were paying attention, I was easy not to notice. It was 2007. I had recently left the collegiate ranks and I was looking for a meet. I found one in Hemet, California.
I was training equipped at the time and I just showed up at the meet hoping to find someone there who could help me with my bench shirt. Lo and behold, Mike Bridges was there. Not even kidding. The meet director introduced me and he agreed to handle me for the day. Talk about luck!
I don’t remember much about the meet itself, but I remember that 804 pull. I don’t think Mr. Bridges knew who I was before hand and most of the people there didn’t either. In fact, that video got published on Powerlifting Watch under the heading “Mike Bridges deadlifts 804” (was corrected later).
At this time in my career (and before), people would see me move some weights and start talking training, etc. Inevitably, they’d ask how old I was. I’d say, “22/23/24” or whatever and they’d reply, “Oh man! You’ve got plenty of time in this sport!”
Objectively, they aren’t wrong. Most lifters peak in the late 30’s, early 40’s. Some even in the mid-to-late 40’s or beyond. So 10, 15, 20 plus years ahead! Yeah, plenty of time.
Now I’m 31. Now don’t take this as an “I’m so old” manifesto – I know better. I’ve said it before; I’m convinced that my best lifts are ahead. But 10, 15, even 20 years doesn’t seem as long as it once did. And from this vantage point I can see how, though well meaning, the “plenty of time” perspective can be insidious. 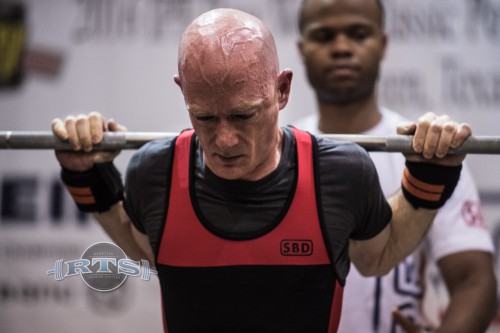 What’s the harm in ignoring good nutrition (which you KNOW is important for recovery and thus your progress)? “I’m super busy this week, so I’m just going to have to cut back on sleep to get the whole thing done.” “There’s no time for the supplemental work this week.” It all has a cost. But no big deal, right? You’ve got plenty of time.
“Plenty of time” is a fat bankroll and you’re buying drinks at the bar. “Plenty of time” is wasted training cycles where you weren’t taking care of business. “Plenty of time” is failing at the little things, but it’s cool because it’s NBD. “Plenty of time” spends before you know it. “Plenty of time” isn’t.
I’m not talking about priorities. You should have those and believe me Powerlifting hasn’t been #1 in my life maybe ever. I’m fine with that choice. But I’ve said it before – Strength Doesn’t Care. There won’t be any exceptions made. You can’t have it all because resources are and always will be constrained. You only have 24 hours and that’s not changing. Even so, lots of the traps within “Plenty of Time” are not due to us choosing better priorities, it’s choosing comfort. It’s not planning ahead. It’s not making the best use of time.
I would love to know what these things cost me. Cost my lifters. I honestly do hope that one day when I die, I’ll get to review a giant accounting of my life (but only the interesting stuff). I like numbers, so I think it would be cool to know how many breaths I took. What was my lifetime total tonnage in the bench press? How many times did I drop the f bomb? Stuff like that. And included in that, it would be cool to see how much better things would have been had I made fewer errors.
But days gone by are days gone by. What can you do from here – from today – to commit fewer errors? Because the truth is you don’t have plenty of time. At least not as much as you’ll need. And the only thing you can do about it is to not waste what you’ve got.
Actionable… They tell me my articles need to be actionable. I need to include a program at the end or some such nonsense. In the words of Mitch Hedberg, “That’s not my styyyllllee.” How about this – if you want to make fewer errors and stop wasting damn training cycles, read something about building good habits. If you have a problem of not knowing what things to do, then educate yourself, find a coach, whatever. But the problem usually isn’t knowledge – it’s follow-through. So teach yourself about building good habits and for God’s sake actually use what you learn. Create some habits that leave less on the platform — because time flies.