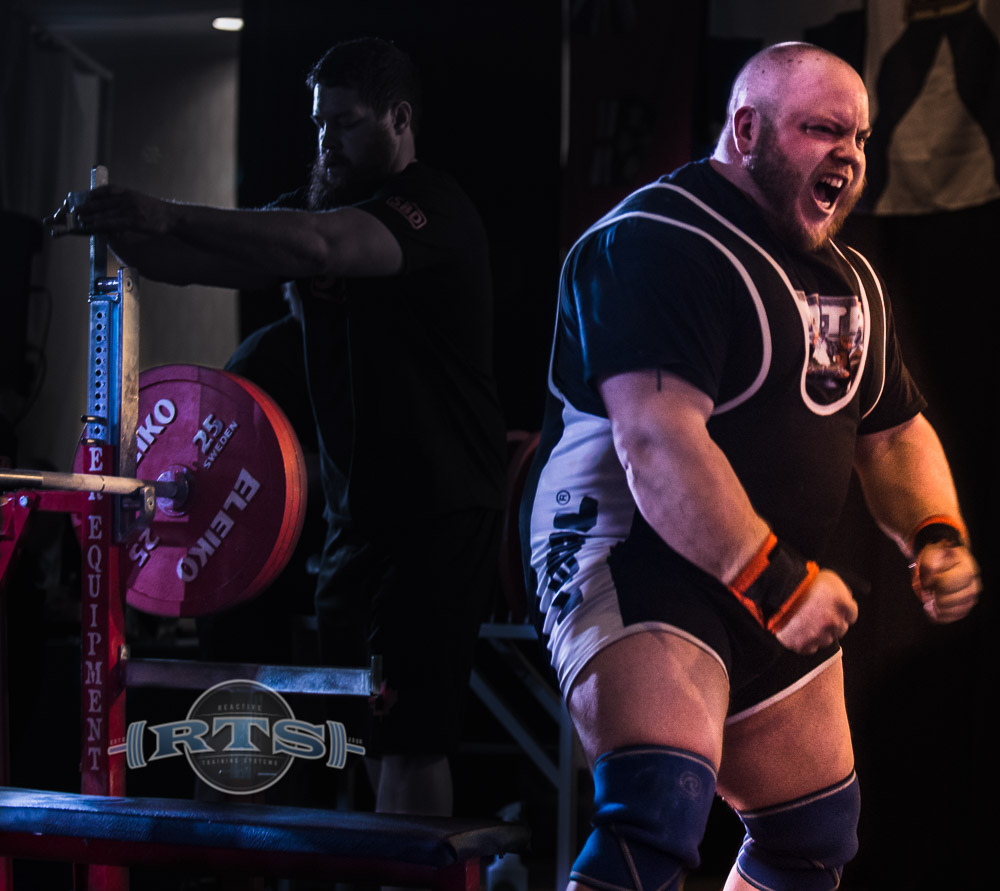 The prevalence of acute S/I dysfunction in powerlifting, from my experience,  is mostly due to the nature of the squat and deadlift. Although, bench pressing certainly possesses the ability to excite acute versions of S/I dysfunction, it seems not to cause it too often.  The imbalances during the bench seem to frequently contribute to or cause chronic cases of S/I dysfunction. It appears that there’s nothing in our sport that is “easy” on these joints. The physical demands on the S/I are high simply by the nature of Powerlifting; however, imbalances and (even slight) technical breakdown can take these joints to their “breaking point” and potentially lead to big problems. 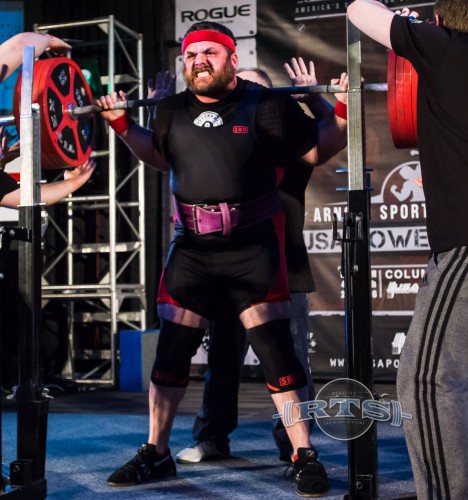 Specifically, the way our technique breaks down during the squat, bench,  and deadlift explains the relatively high frequency of S/I problems for lifters. I will spare you the intensely detailed anatomical explanations, but suffice it to say that most technical breakdown comes with strength imbalances that are not bilateral. In other words, when most people have technical breakdowns like “chest collapse” or “butt elevates”, or even “knees turn in”, those breakdowns are more prevalent on one side of the body than the other.

Because the imbalances are usually more profound on one side (if not exclusively existing on only one side), nearly every breakdown no matter how slight creates a kind of spin or lateral shift to the body. It’s like firing both thrusters on a rocket, but one fires a bit less so the rocket shifts to one side. With this in mind, understand that the S/I joints are the load bearing foundation of the spine during the squat and deadlift.  So, imbalances in strength are suffered by the S/I very frequently. This is especially true when a lifter has a  pronounced hip hinge mechanic in which the S/I endure a strenuous “longer lever” type loading.

Understanding the probable/usual causes of S/I dysfunction can enhance our ability to solve the problem “permanently.”  Understanding the cause can help when making the technical adjustments needed to rehab or prevent the issue. However, the most common therapeutic cases of S/I dysfunction are too painful to train through. The dysfunctional joint(s) cause improper neural patterning and altered proprioception (your internal sense of your body’s positioning). Normally, this can lead to the feeling that squatting or deadlifting is either extremely painful (as in the acute cases), or that it “feels off and I don’t know why; but, I just lose my squat in the hole, and I can’t recover and sometimes it hurts when I back off so I don’t get injured” (as in the chronic cases).

In these cases, we can’t outsmart the problem by simply  making technical adjustments. The reason is, because the patient is  either in too much pain, or when attempting to make adjustment, they just simply CANNOT get his/her body to cooperate because of a dysfunctional nervous system. In these cases, we need to introduce therapeutic stuff to get the situation back on track. Now, the therapeutic process varies considerably depending on  the patient’s demographic, the severity of the situation, the nature of what caused the injury, etc. However, there are some basic concepts that every lifter can apply to get a start taking care of suspected S/I dysfunction without the need of a rehab professional.

First we need to cover what is really causing the problem from a “what is too tight, and what is too weak?” standpoint. I’ll oversimplify the next portion so that we can get to the good stuff. 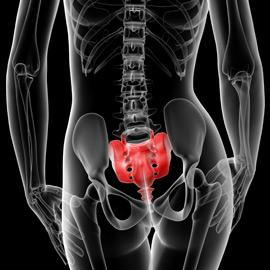 Muscles that can be too tight (Often much tighter on one side than the other, but not always tight or tender on the side that is most symptomatic)

While I just listed a ton of muscles (mostly in the event that an anatomy geek is reading) we can pretty easily just visualize the area(s) of the body that have tight muscles.  On a practical level, that’s enough (because our method of treatment doesn’t really require you to understand anything more than what hurts when you push on it). Here are some pictures representing the areas in general that I’m describing. While the pics show the areas  on only one side of the body, this is not to indicate that pattern of tightness.  This is simply because that’s how I can fit all the circles in 2 pics. When we get to the “What to do about this tightness”, I will always encourage performing the mob on both sides. 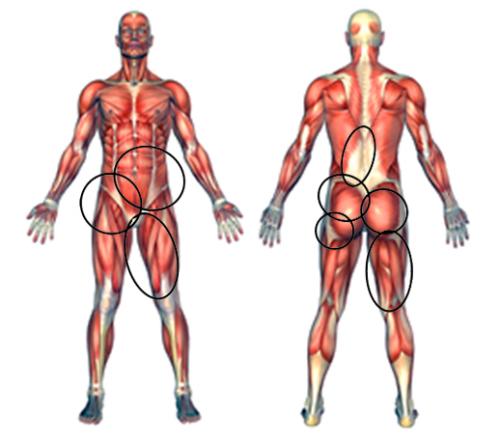 Muscles that are too weak (Spoiler alert – it’s your trunk)

Mobilize with Self-Myofascial Release (SMFR) the areas described as “too tight” pictured above. The nature of each S/I imbalance case is unique, so some areas  may hurt more than others. When you find a tender spot, keep as much pressure as you can tolerate on the area until the pain reduces in half (at least). This may take SEVERAL minutes depending on the nature of the beast; so, hang in there. Stay still and do one spot at a time. Look for 2-3 tender areas at least per day to work on.

Once you’ve addressed the tight spots, it is time to re-balance the pelvis with corrective exercise via what I term “Non-Specific Physical Preparedness”. This is usually one (but sometimes 2 or more) workouts that have exercises that are specific to pelvic re-balancing; but, these exercises aren’t in any way like the powerlifts. These exercises are selected to stimulate the deep stabilization musculature that commands postural alignment during movement.

You’ll need to improve trunk stability via planks, side planks, and deadbugs.  Additionally, you’ll need lots of glute work and some targeted low back work. Train with isometrics first and  pay attention to detail. The quality of movement  is going to be the difference maker most people. Determining Trunk rotation strength (or lack thereof)  will be important  for the S/I dysfunction patient. Strength is often noticeably weaker and restricted on one side, overall trunk rotation is often just plain weak in general in powerlifters (especially those with S/I dysfunction). At first, train to resist rotation via isometrics. Then, when you’re pain free, begin rotating the spine under scaling loads with exercises like landmines and cable trunk rotations. Make sure that you’re able to address the imbalances / restrictions in your trunk rotation if and when you begin performing loaded trunk rotations. If your body isn’t properly aligned during the exercise, you might make the problem worse  (and you’ll feel it in the hip / low back the next day like not good). However, this isn’t always the case. It’s just something to keep an eye on and may be a possible explanation for the perceived pain.

Mobilization: Always perform thoroughly before beginning workout, then perform any/all of these as needed throughout the workout.

Exercise A: Deadbug with lower abdominal draw in hold for 30-45 s

Exercise B: Side Planks 30 sec hold on each side

Exercise A:  Glute Bridge with band around knees* hold 30-45 s (Squeeze your ass HARD and evenly with both cheeks during these)

Exercise: Cobra hold for 45s.* (Squeeze your ass HARD and evenly with both cheeks during these)

**Non-Specific work used in rehab cycles really MUST be performed on non-consecutive days, and as many as 3 times per week. Once non-specific work can be performed without pain, we begin programming back in the powerlifts. I usually recommend performing the non-specific work to maintain progress once barbell work is re-introduced at least once per week until training intensity is “back to normal” and you’re 100% pain free (which often equates to about one month’s time). 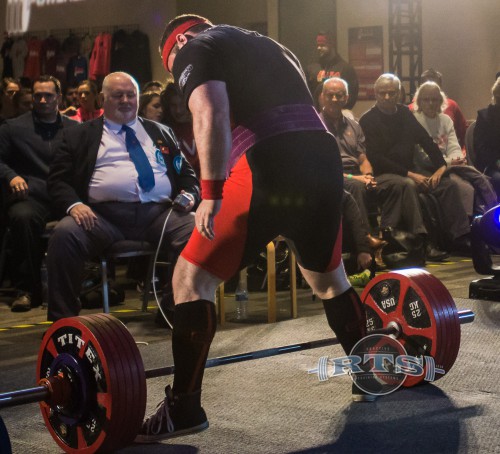 Last but not least, fix your technique. This is where I advocate for videoing sets and looking for those rotational or unilateral dysfunctions. A mirror can be sparingly used as well;, but, we all know you’re going to have to do it without a mirror at the meet. So, use it to improve technique, but you’ll have to just feel it at some point. For this reason, I prefer video as it forces you to adjust and review after each set without the mirror.

Programming-wise (once you are performing non-specific work at or very near pain free), try slowing your reps down with tempo eccentrics and/or concentric and emphasize pause work to give you the chance to re-pattern better / pain-free technique. Your goal here is to get your glutes firing evenly (either out of the hole in the squat or right off the floor during the deadlift) and keep even, mindful activation of the low back, abdominals and obliques, to stabilize. Observably, this shows no wiggles and symmetrical force output from both hips straight up, no rotation.

“Weeks” is conceptually used as probable time committed to each phase. Many cases take more time for the workouts in each “week” to be able to be performed pain free. In this case, a “week’ may represent multiple weeks of repeated workouts until said workouts are being performed without pain.

This program is assuming that main symptoms are coming from Squat and Deadlift as is the situation in most acute cases, and so bench training is left out but assumed to be performed.

Mobilize (as needed, until tenderness is eliminated): S/I via peanut, Adductors, Psoas

Perform mobilization and activation drills between sets of comp work through warmups AT MINIMUM, but also into the work sets if there’s still work to be done (you’ll feel it).

Mobilize (as needed, until tenderness is eliminated): S/I via peanut, Adductors, Psoas