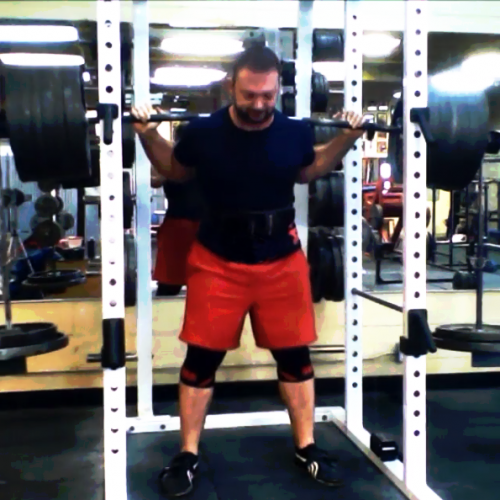 I’ve recently posted a few videos of myself using weight-releasers on my Instagram and Facebook pages.  People seem to think they are cool, so I thought I would share what I know about them.

Squat +160 weight releaser: 635×4. This is how I use the WR for rep work. The WR swings bad on the walkout. Let me tell you, that’s no fun. You’d better be very stable before attempting this. Sure would be nice if there was a way to do this training without the swing. Oh well. I’m done with WR for the rest of this training cycle. Can’t say I’m unhappy about that! 🙂 #weightreleasers #rts @reactivetrainingsystems #autoregulation #powerlifting #squats #eccentrictraining

Bench 425×1 +100 pounds weight releaser 7.5RPE. I use weight releasers from time to time in my training (and for those of my athletes who have access to them) when we want to emphasize eccentric force production. I’ve found that when used correctly, they can have a decent impact on concentric force production. Not crazy, but when it’s competitive, you take whatever you can get. #weightreleasers #eccentrictraining #negatives @reactivetrainingsystems #rts #benchpress #autoregulation #powerlifting

Origin Story
Weight releasers are an old-school Powerlifting tool that kind of faded away in the last couple of decades.  I’m not exactly sure where it started, but I’m fairly certain I first heard of them in a Louie Simmons article in that classic PL mag, Powerlifting USA.  An internet search showed me the general concept, but I could find literally nowhere to buy a set. 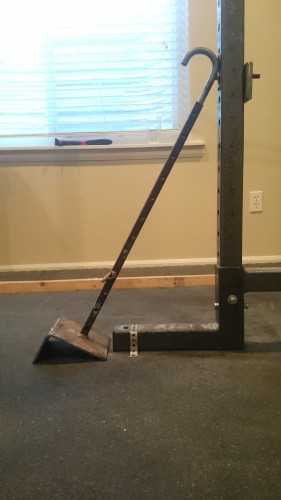 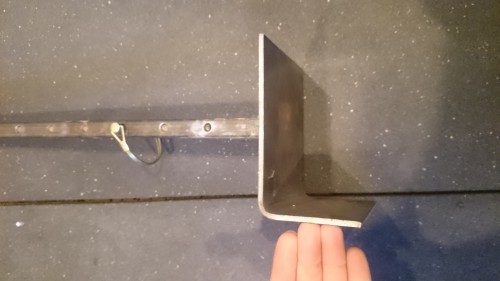 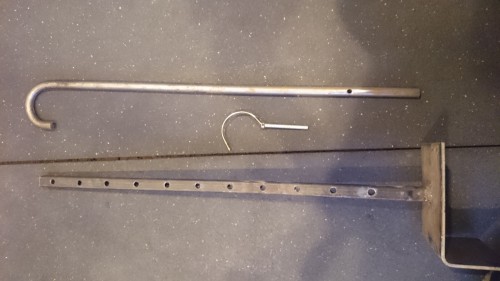 So I sat down with a pen and paper and I sketched something up.  Once I had the idea down, I took it to a local welder and he agreed to build me a set.  I don’t remember how much it cost, but it wasn’t terrible.

Pictures of mine are below.  For any of you imaginative enough (or if you know a welder with some creativity), there should be enough here for you to make your own set.

Some things to keep in mind…

The hook that goes over the sleeve of the barbell… You want it deep enough to tolerate a little swinging without popping off the bar.  But the deeper the hook, the further you have to go before the weight disengages.  For reference sake, I feel like my hooks are slightly too deep.  If I could do it again, I’d make it a tiny bit shallower.  But hey… if you’re making your own, it might be better to start slightly long than slightly short.

And speaking of improvements to this design… I’d drill about twice as many holes as I did.  This hole spacing isn’t bad and it works fine.  But it would be nice to be able to dial it in a bit more closely.

How to use them
So after you have your very own set of weight releasers, what do you do with them?  Well first, let’s talk safety.  As demonstrated in my videos, the most common use of weight releasers is to overload the eccentric of a lift.  If you’re handling super-maximal weights, safety is always going to be a major concern.

First of all, make sure you are properly conditioned to use weight releasers.  I’ve been warned many times about them from people I respect who have seen people tear muscles and tendons using this tool.  So use at your own risk and make sure you’re prepared.  That means if you’re just coming off an injury, don’t use them.  If you’re prone to injury in a particular muscle, don’t use them.  If you lack stability or are in ANY WAY unskilled at the lift… DON’T USE THEM.  Plenty of people have gotten strong without them.  It’s just a tool and not worth hurting yourself over.

If you’re just getting started with weight releasers and relatively healthy, then start by putting a weight on the release that takes you to a 100% eccentric.  Then as time goes on you can increase to 105%, 110%… even up to 120%.  Always remember to ONLY increase the load when you can demonstrate you have control over the current load.  Nobody gets stronger from ballistic eccentrics.

Also, take your time to make sure the releasers are set up properly.  The worst thing would be to get pinned under a weight you have no business handling because the device is set up incorrectly.  When you’re setting it up, try it a couple times with a light weight before you increase into your working sets.

Once you’ve eased into the use of weight releasers, you’re ready to get into the meat of training.  Lately when I use the weight releasers, I will start with a moderate single (x1 @8 for those of you with RTS-experience).  This single exposes me to the very heavy eccentrics.  Then I will reduce the weight and do multiple rep-sets.  I usually keep the reps to 3-4 so the load can remain fairly heavy.  For these sets, you get the heavy eccentric on the first rep, but subsequent reps are normal.

I’m not sure why we see lifters getting stronger from this method – only that we do.  My guess is that it’s a motor learning process.  We know that the muscles are capable of producing more force in an eccentric contraction.  Perhaps the exposure to higher intramuscular tension helps concentric tension by desensitizing the GTO.  Or perhaps it helps your nervous system better coordinate the impulses and improves force production that way.  Or the effect could be psychological.  I’m honestly not sure yet, but we do see that it has an effect on 1RM.

A typical protocol for me might be as follows:

In this way, you’d be handling about 112% on the eccentric for the single.  The triple would be around 110%.  The down sets would be around 105% or maybe slightly below.  This is plenty of exposure to super-maximal loads.  And remember, only go this aggressive once you’ve worked into it!

What you can expect from using them
As I mentioned, there is a training effect from using this method.  It’s not a giant training effect, but it is something meaningful for a competitive lifter.  It’s also a very tiring method.  Well, tiring isn’t the right word.  It’s exhausting.  It’s taking a weight that is by far heavier than you can lift, and giving it a ride.  Then at just the right moment, it will reduce by a small amount so that you CAN lift it.  It’s far more taxing than a traditional max attempt.  It is comparable to a geared maximum attempt.  Stabilizing and controlling that load and then taking it eccentrically requires a level of attention and engagement that is typically not required in raw lifting.

People talk about the extreme soreness from eccentric training.  I have not experienced that.  I get slightly more sore than I otherwise would when following the typical protocol I listed above.  So if this negatively affects your volume or frequency, I doubt it will be soreness.  More likely it would be your mental and neural fatigue – the mental fog that comes after lots of high-intensity work where everything suddenly feels heavy.  But in my experience this is not debilitating.  Especially if you have a day of rest after an eccentric session, I doubt you’ll see much negative impact.

In terms of positives, I mentioned that we do see strength improvements in many athletes when using this method.  It’s typically not crazy, but it’s there.  Also, this is not a method for beginners, which also contributes to the smaller effect size.

This method *should* be a good primer for muscle growth too, but in honesty, I haven’t examined that closely.  Since it’s a method that should only be used for a couple of weeks at a time, I doubt it causes much meaningful growth itself.  But if it primes your system for more growth when returning to regular training, that could still be a net win.

Weight releasers are an old-school tool that can help powerlifters get stronger and control the eccentric of their lifts better.  With that said, you’ll probably have to make your own and even then the idea has several risks.  Those willing to take the risks (of course mitigated as much as possible) are likely to see a reward of strength improvement and possible hypertrophy as well.