Not Your Typical I.T Guy

While being relatively new to the sport of powerlifting, Mike Garozzo is not your typical newcomer. He has racked up an impressive total in a very short amount of time. This interview was done back in April 2015 and a lot has happened since then. Mike competed at the RPS Heatwave meet held in Long Island, NY on July 12th totaling 1675lbs raw without knee wraps at 198lbs bodyweight and later competed at the 2015 USAPL Raw Nationals in Scranton, PA placing 7th in the open division with a 1642lbs total. Here is a look at Mike’s progress over his brief career:

RTS: How did you get into powerlifting and eventually start working with Mike?
Mike Garozzo: I got into lifting through a weight loss contest at work. I used p90x and a strict diet to win it… by a lot. I’m right around 5’10” and my body gains and loses weight very easily. I went from a chubby 195 lbs to an extremely lean 152 lbs. Once that was over, I realized that I needed to build some muscle because I was tiny, but I had no real weight training experience to this point. I started researching and realized strength training was the way to go, at the time StrongLifts 5×5 caught my attention and I started with that. I started SL 5×5 in February 2012 and I started with Mike in December 2013. RTS and Mike were brought to my attention when someone posted on one of my training videos on YouTube about him. After reading everything on the RTS website I knew I wanted to work with Mike and give RTS a shot, I’ve never looked back since.

RTS: Where do you live and what do you do for a living?
Mike Garozzo: I live in Westchester, NY and work as a manager of Systems/Network engineering for a private equity firm. We only have about 500 users and a pretty small team, so I am very hands on but it’s fun. My fiancé and I are in the process of leasing some space to open up a powerlifting/strength gym in Westchester, NY. There is a severe lack of strength facilities in the area and we want to fill that gap. We envisioned something kind of similar to a barbell brigade style gym with our own twist. More to come on that!

RTS: You are probably one of the first interviews I’ve done where your not-too-distant past was beginning powerlifting. What has been the biggest challenge making the kind of progress you’ve seen from beginner, to intermediate, to advanced lifting?
Mike: The biggest challenge without a doubt was training environment. I started out training at a commercial gym with bent bars, hex plates and one squat rack. There was nights I had to wait an hour just to squat or get funny looks because I was making too much noise deadlifting… Deadlifting for reps on hex plates isn’t fun either. One positive thing that came out of that however was when I went to actually compete at a meet that had real equipment everything felt really easy. Unfortunately, there were no better options within 45 minutes of me and I never really expected to get as serious into powerlifting as I did. Once I knew I was getting pretty good at it quickly I set out to start building a home gym which is where I train exclusively now.

RTS: So like most RTS lifters you train alone?
Mike: When I trained in the commercial gym I was the only one lifting heavy so I pretty much kept to myself and did my own thing. Now that I train at home and got my fiancé into powerlifting lifting we train together.

RTS: Does she follow your programming or have you started adapting training for her? (i.e. writing her training)
Mike: I have been doing her programming, I had her follow a similar progression that worked for me. She started with 5×5 and then my modified version of 5/3/1 with added volume/frequency. It’s been working really well for her but I think she has just about exhausted any major progress they can offer. One thing we have been discussing is having her start the RTS Generalized intermediate program now that she has a really good understanding of RPE.

RTS: When did you start her on RPE training and do you think it was better to start her on RPE training yearly?
Mike: I had her try it in the very beginning, and it didn’t work out well. She would rate a set an RPE 9 when bar-speed was still high and there was probably 3-4 more reps in the tank. Once she started doing AMRAP sets in 5/3/1 did she finally realize what an RPE 10 truly is. Now that she is an intermediate I think she will more accurately be able to judge RPE which will make it much more effective. RPE training is on the table now after 9 or so months of training with the other methods.

RTS: What federation(s) do you compete with?
Mike: I’ve competed 4 times, 3 times with RPS and one time at Raw Unity. I plan on doing another RPS meet in July and then possibly lifting with USAPL.

RTS: I’m not super familiar with RPS. What are some of the differences between it and USAPL?
Mike: There’s a couple main differences, with RPS there’s no membership to maintain. You lift when and where you want. They allow 24 hour weigh-ins and they use different specialty bars for each of the three lifts. Mike (Tuchscherer) has my current training cycle to peak me for the July 12th RPS Heatwave meet.

RTS: How was your experience at RUM other than your performance?
Mike: RUM was really fun, the camaraderie really stood out, Kyle Keough who I didn’t really know had just finished lifting and broke the all-time 148 record ended up giving me my bench hand offs and supporting me in a huge way. The battle of the 220’s was really intense to watch, never have I seen spectators so engaged… when Dan Green came up to lift a room that was more than packed turned completely silent. It was pretty amazing to be part of.

RTS: I bet.
Mike: (At RUM) everyone supported each other, including the spotters. Every time I got up to lift the spotters made me feel like my close friends were up there cheering me on. They were
awesome.

RTS: Yeah, I’d love to hit numbers to go to that meet someday.
Mike: If you ever get the chance you should definitely do it. The only thing I’m upset about is if I go USAPL, I will probably not be able to compete at RUM anymore.

RTS: Yeah, I’m not sure what the politics of that are.
Mike: I’m not fully sure either, Mike (Tuchscherer) has tried to explain it to me a bunch of times. But, I’m pretty sure if you have a USAPL card, you can no longer compete in large untested meets anymore. Local meets “should” be ok.

RTS: Have you had any injuries coming up and how have you dealt with them?
Mike: I’ve been lucky that I haven’t had too many major injuries, but I do have some nagging aches and pains. The only major one which also happens to be self-inflicted was about a year and a few months into powerlifting. I had been doing exclusively high bar squats, my squat was right around 405 and I thought maybe if I do low bar I could do more weight. I ended up hitting 425 low bar but did bad things to my lumbar spine. It’s obviously not wise to go for a new max on a lift you’ve never even attempted before. That kept me out of the gym for about a month. Other than that I deal with occasional SI joint pain on the left side and some elbow tendonitis. I deal with the SI joint pain by rotating in sumo deadlifts instead of conventional when it flares up, that has been working well. I manage the elbow tendonitis which is from low bar squats by reducing my bench volume and switching to high bar squats. I am also working on shoulder mobility to try to reduce it from reoccurring in the future, but that has been a slow process.

RTS: What about your bench progress, what is that looking like?
Mike: My bench progress has been slow but steady, I have long arms which doesn’t make things easier, but I’ve been able to keep the ball rolling. I hit 341 in Feb at Raw Unity and am at an estimated max of somewhere in the low to mid 350’s currently.

RTS: Do you bench wide or narrow grip?
Mike: I’ve been slowly moving my grip out over time. I used to bench with pinkies inside the rings, then last year when I trained with Mike T he has me put my ring finger on the ring. More recently I’ve experimented with my index finger on the rings (max legal grip) with decent success.

RTS: I just read that RUM IX will be no mono-lift and no wraps… thoughts on that?
Mike: I’ve lifted in wraps for my first 2 meets and didn’t really care for it. Walking out my squats at this point is second nature, so my upcoming opinion is from a lifter who has no emotional or physical investment in either of those things. In general, I support decisions to make powerlifting less fragmented and unified. Raw Unity in particular pushes this message so having lifters broken into separate divisions seems to be counterproductive if the goal is Unity. I also feel like as a lifter I can relate to the guys without wraps who are much stronger than me because there isn’t the additional variable of wondering how much they are getting out of their wraps. So it’s something to strive for. On the other hand as a spectator it adds another dimension to the excitement, it’s always cool to see lifters go for weights that you wouldn’t ordinarily see.

RTS: Yeah I can see both sides of the story in that regard. It would be cool to see USAPL or USPA adopt and/or begin to sponsor RUM.
Mike: Yeah, that would be awesome. Would love to see them come together in some fashion but, that’s most likely wishful thinking I would imagine. It would be cool to get there someday.

RTS: Do you have any recommendations for how you dealt with SI joint injuries.
Mike: I’ve been lucky that it’s never been too severe, once in a while if I feel it coming on I just back off and do alternate movements like sumo deadlifts and oly high bar squats instead of my competition lifts. I have gone to chiropractors and also tried deep tissue massages before but never saw too much benefit from them. I also don’t rely on icing or anti-inflammatory medicines for this type of thing. What I have found more beneficial is trying to mobilize the surrounding areas, usually if my SI joint hurts I get relief from doing things like paused squats to open my hips and foam rolling my I.T bands as well as my hip flexors.

RTS: Hey thanks for your time Mike.
Mike: No problem! 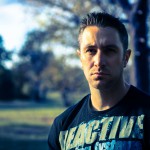 About the Author
Adam Palmer is a coach and the Managing Editor for Reactive Training Systems.